Meet the Creators Behind sPOTs


Throughout history, the adoption of cannabis by popular culture has been nothing short of polarizing. For example, while Europeans were unfairly colonizing America, the British saw pot as a cash crop that traveled overseas and also stayed on native soil used primarily for hemp’s role in making rope. Settlers were probably using it for medicinal purposes far before it was documented in the mid-1800s but that’s also when American pharmacies started labeling the additive on prescribed products treating a number of ailments. Growth and possession were politicized partially to regulate its addition by snake oil salesmen through America’s “poison laws” and through efforts by some to destroy the hemp industry. But it wasn’t until the popular plant was attached to beatnik subcultures that all hell broke loose planting the early seeds for the grossly unjust “war on drugs.”

As joints showed up en masse pursed between the lips of jazz musicians, hippies, surfers, artists and the mid-century creative class, weed again went underground and so did the depiction of its reverence. For years, pot fans scribbled and sketched the plant as a love letter to the healing power of seven little leaves. A lot of those ended up printed on the pages of publications by The Underground Press, a socialized multi-media organization that reached deep across the states.

Marijuana grow guides were part of the publications that fell under the democratized conglomerate with a number of talented illustrators contributing an endless amount of artwork. Recently, David Jacob Kramer of Family Books and graphic designer Denzel Boyd unearthed a number of these for a zine called sPOTs: Weed Spot-Illustrations From Growers’ Guides and The Underground Press 1966 - 1973. Kramer shared more about this special place in time when weed reverence spread far and wide while politicians twiddled their thumbs for decades to lead us to where we are now again making cannabis more acceptable. 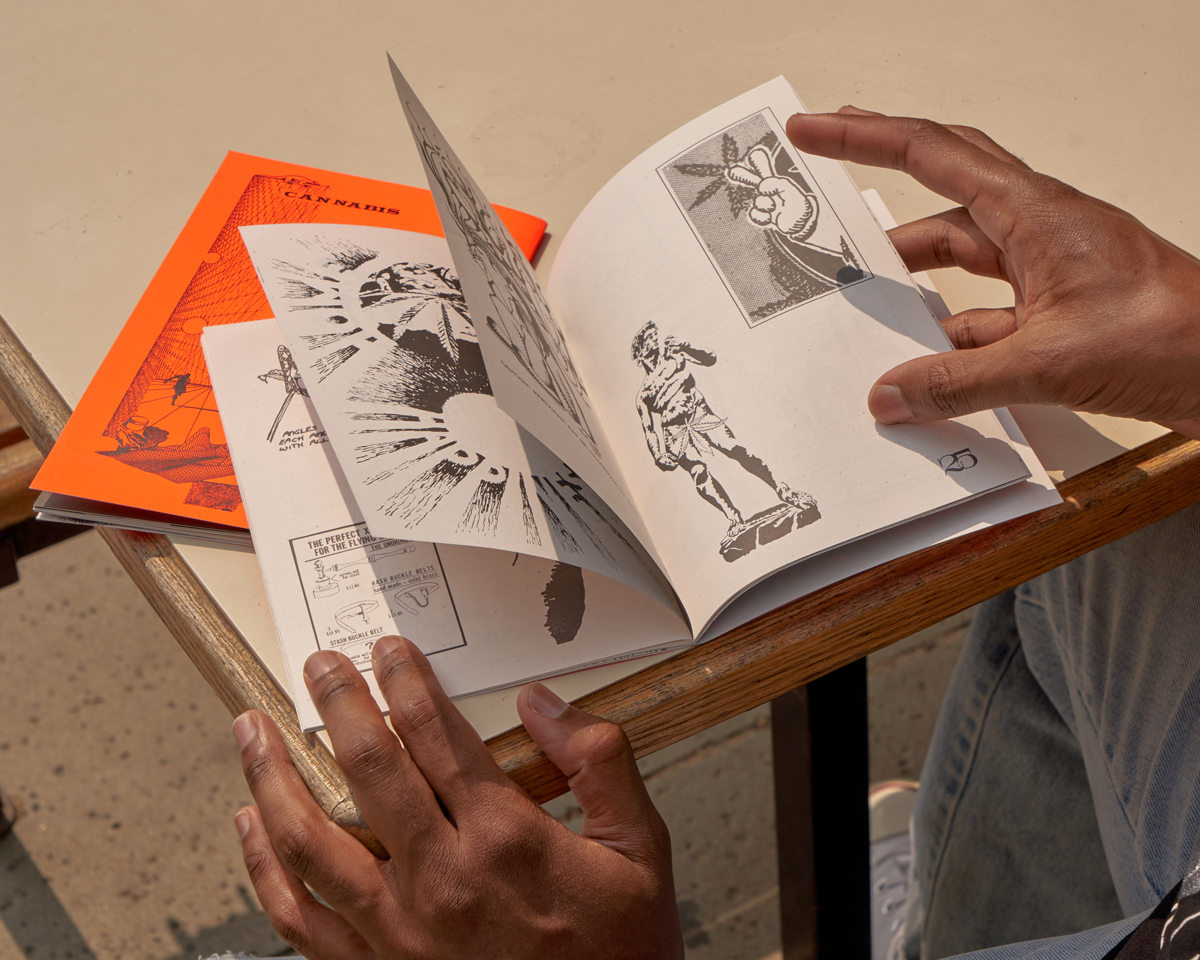 First off, how did you two come together to collaborate on such a niche yet poignant stoner project?

I was lucky enough to work with Denzel at Imprint Projects where I am a creative director. I was a big fan of Denzel’s work and also his interest and taste across visual disciplines. It’s impeccable! When I mentioned what I was collecting he could see what I liked about the imagery. I wanted to be reverent to the imagery while isolating it from its original context, but without taking too much license. He got that balance.


For the uninitiated, can you explain more about the “underground press” and “grower’s guides” to help define those for our audience?

The Underground Press Syndicate started in 1965 as a network of five independent publications in the US. Within a few years, it swelled to over 300 across the world with a readership in the millions. Likely the biggest explosion in the history of American publishing. Each was locally-oriented, but operated under an agreement of non-proprietary content, meaning free reprint rights to anything that appeared in any other member paper. There were shared revolutionary principles: a rejection of mainstream media, and an ideologically de-professionalized approach. Newsprint was cheap and offset printing opened up new design possibilities for hand-layouts. Spare space was crammed with “spot” illustrations, squeezed between words and woven through columns, and pot-related iconography was particularly popular. 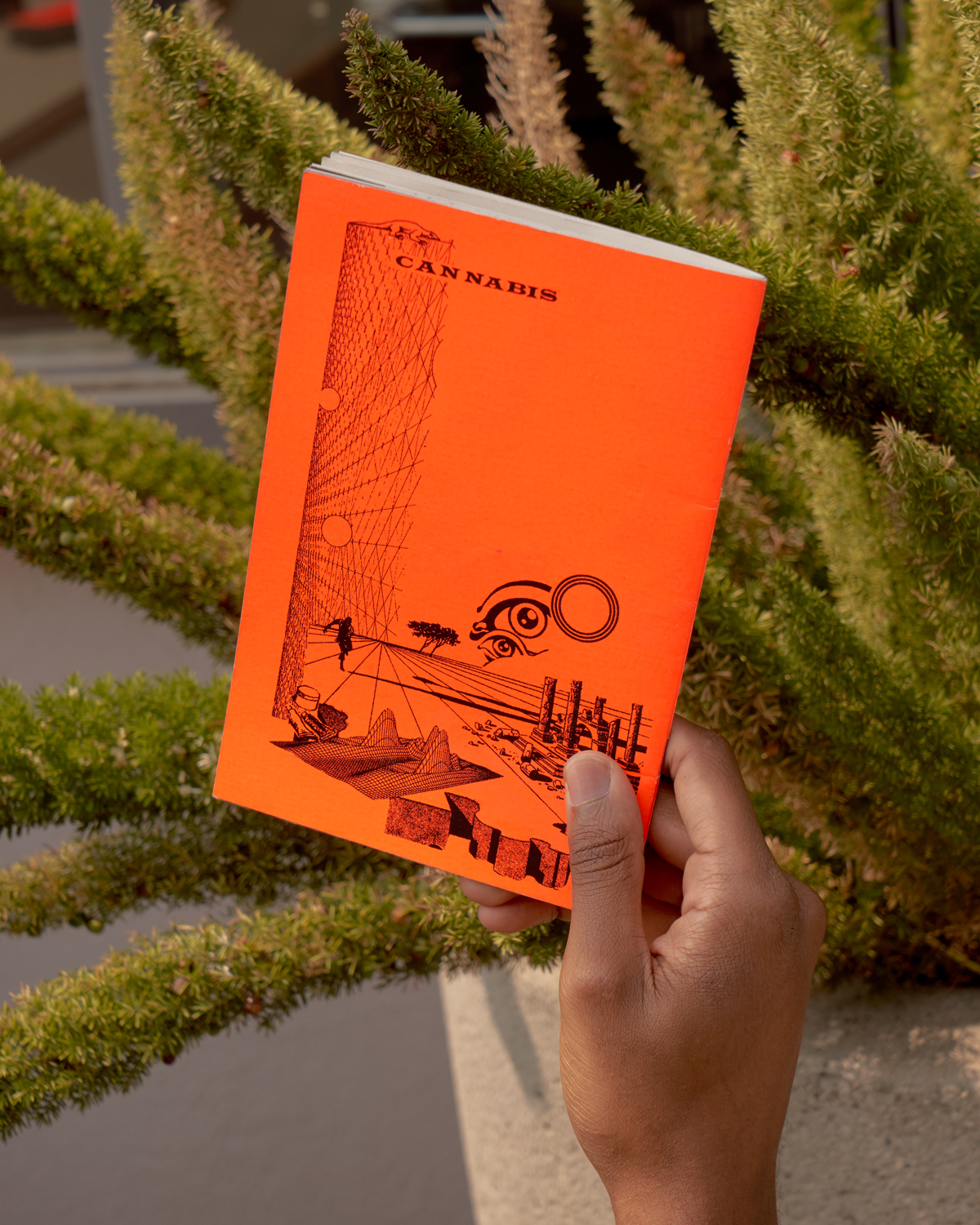 We imagine it was quite the treasure hunt to find the material. Any interesting anecdotes to share as you unearthed these pieces of pulp?

I’ve scoured ebay over the years. Sometimes you find a bunch for a fraction of what other sellers are offering. It’s obsessive. Also some amazing bookstores like Kayo in the Tenderloin in SF. Also Bolerium in the Mission. Both have a lot of vintage ephemera and helped me sort through and friends have collections. You might know Roger Steffens of The Family Acid? He lives near me and loaned me boxes of them from his storage space.


A number of the ads illustrate that cannabis is communal and the notion that the plant brings people together. Were there any additional obvious messages being communicated from that era?

Well it’s not really like this now, but back then pot had become a kind of symbol for the broader revolutionary struggle, and made its way into the emblem-design of activist groups from the Yippies and White Panthers, all the way to women’s liberation with groups like the New Nation Sisters. The culture of the underground press was this mingling of New Left politico activism and hippie outsider psychedelia so the symbols that emerged evinced both. 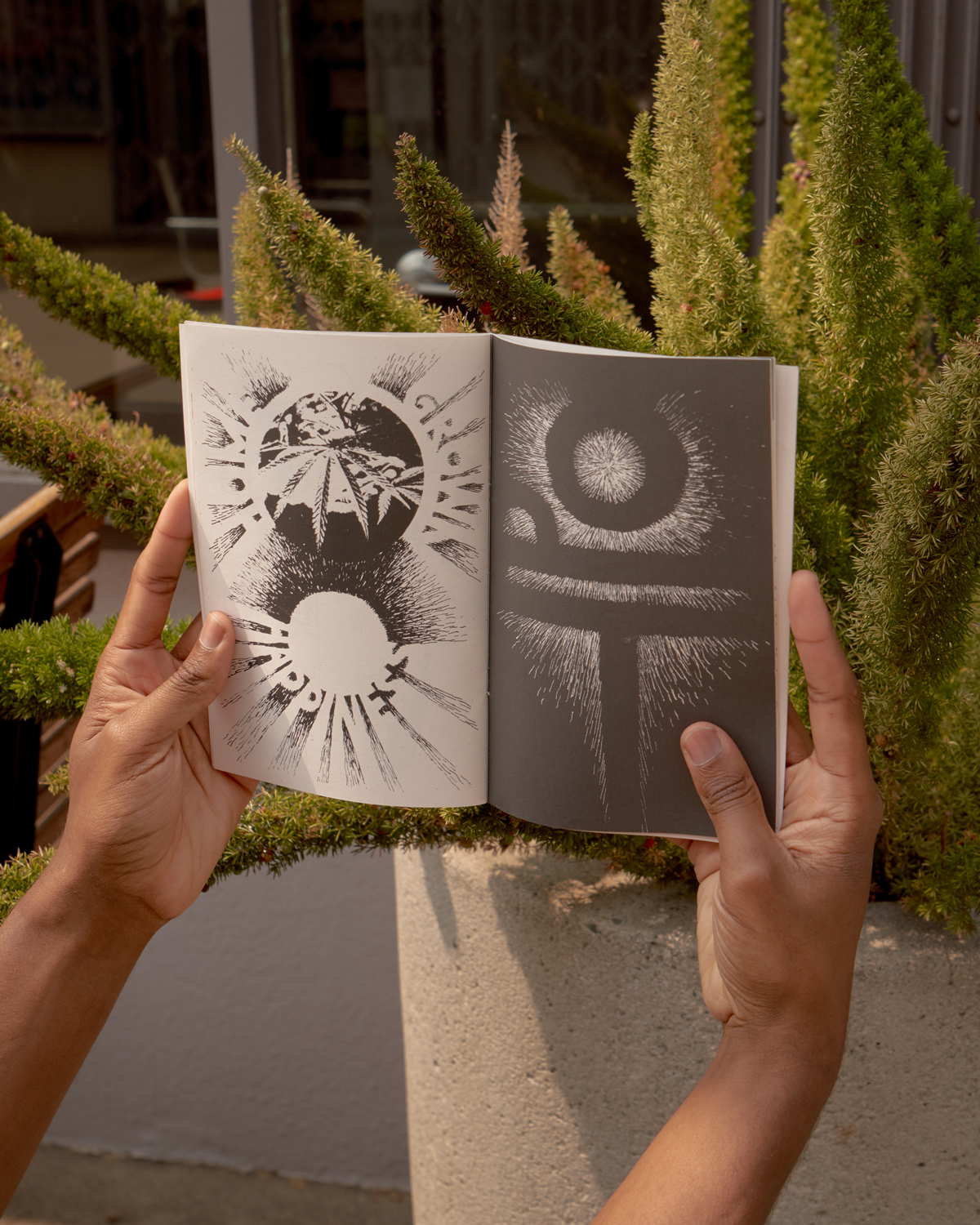 Recently, we dug deep into the connection between cannabis and surfing and sadly coming across a pretty pervasive “white washed” perspective. Did you unearth any art that celebrated BIPOC individuals? If so, can you share some examples?

Hippies were easily identifiable by cops and pot was an easy way to criminalize them. This had obviously been going on for a long time with the black and Latino populations who were strategically criminalized for pot well before hippies, and long after. Hippies and Beats famously romanticized pot’s associations with those communities and the underground press did publicize the pernicious strategies in criminalizing them. The legalization movement in particular has deep roots in the underground press, but its success is kind of equivocal. The corporate pot market is still less concerned with the bodies incurred on the path to legalization or those still incarcerated, in favor of a sanitized, apolitical commodity. Its profiteers famously do not reflect those criminalized communities. 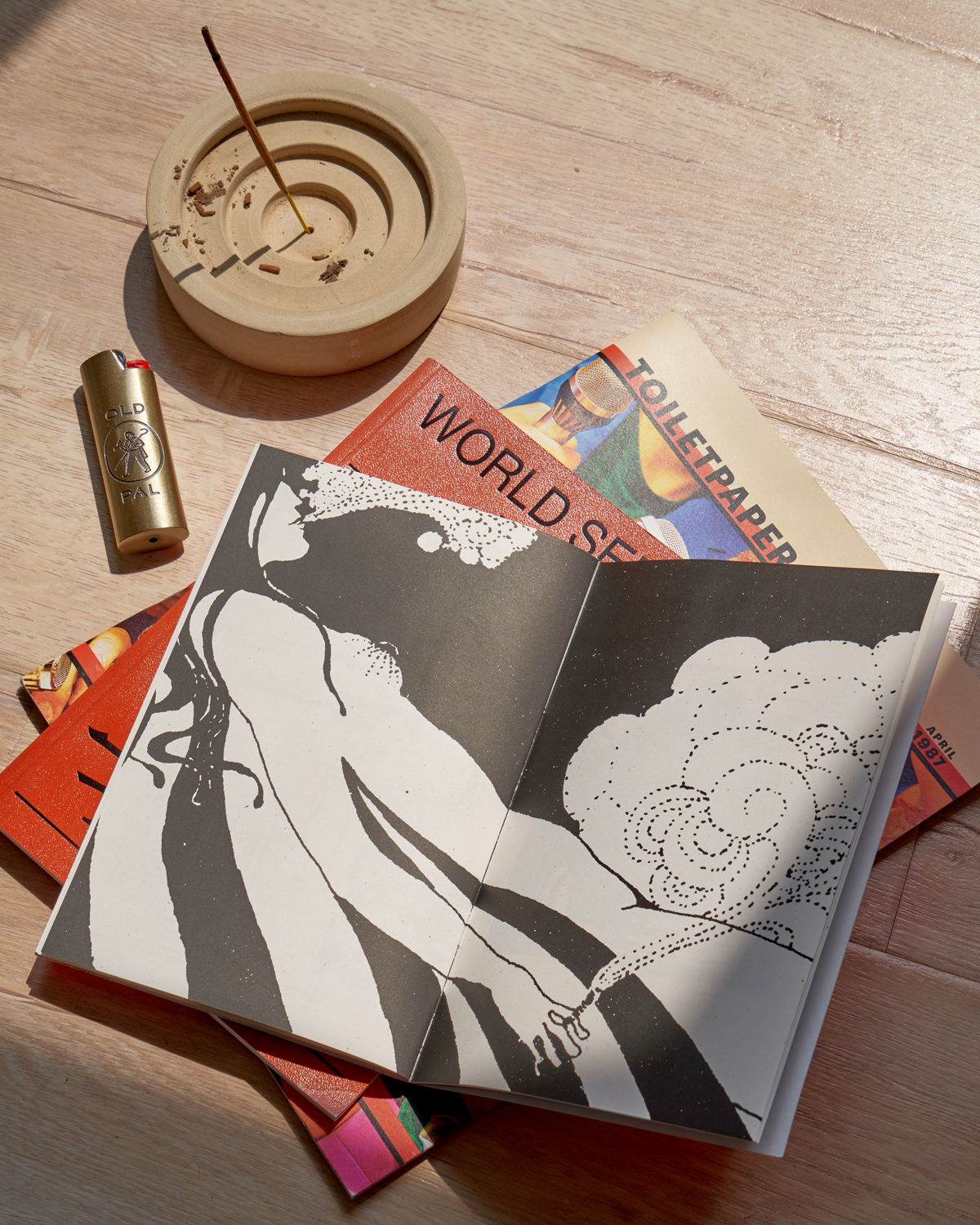 There are a lot of unknown artists featured in sPOTs. Did you come across any illustrators who had been collecting dust since the 60s and 70s?

So, so, so many. I could go on and on. That was kind of the idea of this zine, which was to go beyond the canon of Crumb, Kim Deitch, and Gilbert Shelton and spotlight the undersung figures who were no less influential at the time.

One artist in particular just signed her work “Hetty.” I kept seeing her stuff and eventually discovered she’s Hetty Maclise, married to Angus Maclise who was the original drummer in the Velvet Underground (and an important minimalist musician and visual artist himself). Hetty contributed to some super famous issues of the SF ORACLE, actually inventing the rainbow color effect that became ubiquitous by filling plastic ketchup bottles with different colors and squirting them into the press. She also did the back covers of a bunch of issues of the East Village Other as ads for Dynasty Records and they are all amazing. She incidentally worked at a leather store in NY and crafted the fringed jacket that Jimi Hendrix wore at Woodstock. (She also dated Pig Pen for a while and got busted for weed with Loudon Wainwright and never forgave him because his rich parents bailed him out and left her in jail. She’s also the subject of some iconic Ira Cohen photos). She eventually moved to Tibet where her son became a monk at age four and later recognized and revered as a reincarnation of a High Lama.

I’ve been collecting more and more of this imagery since that zine and currently working on a very large book on all this. Stay tuned!