A Conversation with Stephen Milner

Perspective is everything when it comes to creating our reality. In fact, how we see things not only shapes the world around us but can influence others to change the lens on their worldview. This is embedded in our character and is as much of a part of evolution as physically adapting to our environments.

Disruption is also central to perspective. With a sport like surfing, a simple tweak of a tail shape or the addition of a fin completely revolutionized the sport and the way surfers drew lines on the face of the wave. As a result, personal style was as much a part of identity as the way surf media portrayed wave riders.

In between the pages of magazines picturing the pros with their expansive wingspans doing massive cutbacks or riding tubes at a nondescript location, scantily-clad models also surrounded surfers in ads or were objectified on the beach in the foreground. If we were in Grecian times, the popularization of this perspective would have been immortalized in statues glorifying those perversely heterosexual scenes. That’s how prolific this gaze was depicted, one that was naturally alienating for anyone identifying as LGBTQ+ or female.

As a gay surfer, artist Stephen Milner saw things differently. He not only sought refuge in the cathartic wanderlust printed on the pages of saddle stitched surfing magazines but noticed that some scenes looked more erotic in nature than an expression of athletic prowess. In fact, his whole perspective on the various aspects of the surfing world refresh the ways that someone other than a straight male sees everything from a goat trail that meanders down to a world-class surf break that pulls double duty as a nude beach, to cropping in on a water rescue scene that looks more intimate in nature than dire. In this interview, we dive deep into the process that led him here and the shift that can happen towards a more fair future if we just take the time to indulge in a different perspective. 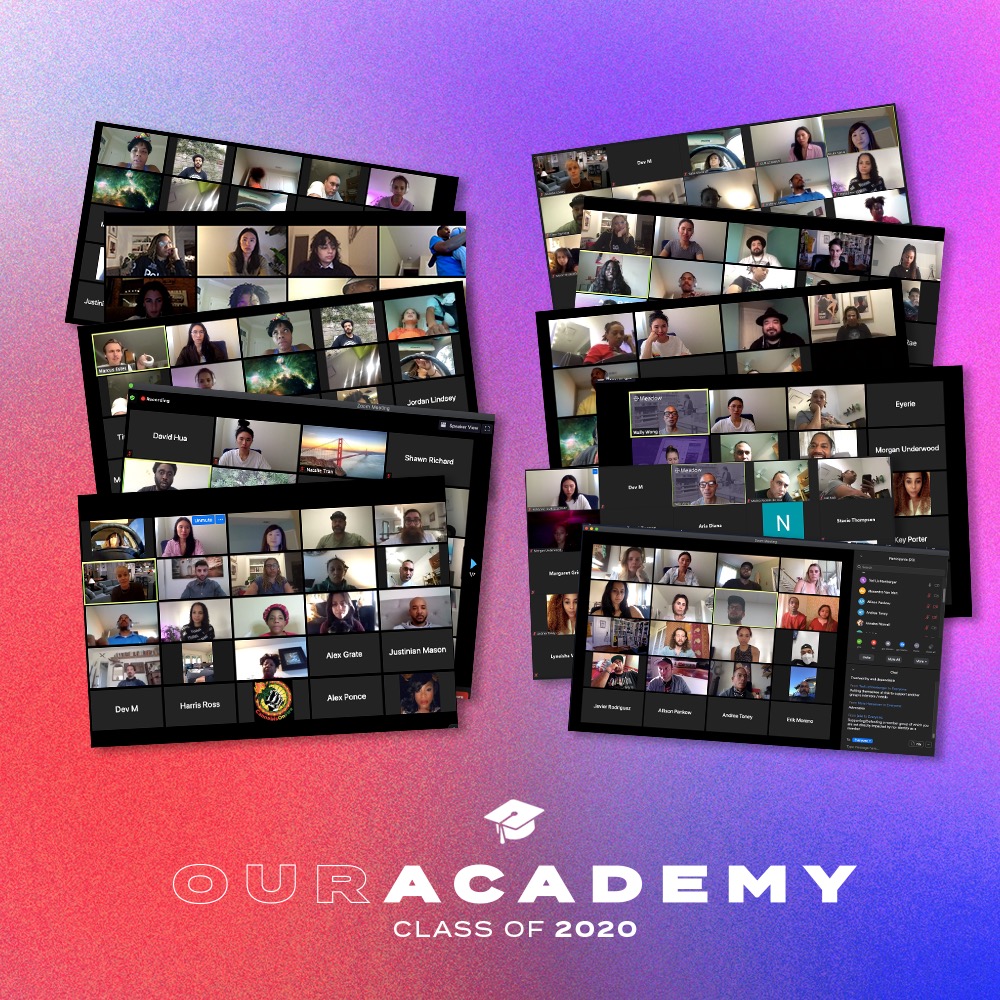 It seems like there is a nod to artist Richard Prince in your recent work by recontextualizing pre-existing imagery. Did you have any constraints to edit what did and didn’t make your new book?

People ask me why not photograph surfing and that answer is simply because I found the act of appropriation and re-contextualizing imagery from magazines more powerful of a statement. I think Richard Prince is the most bold and clear example when it comes to appropriation in art history. He is always my go to artist when I have to educate some surf bro about art history and “copyright.”

Over time, I definitely set a few rules for myself when making this body of work. I came into the project thinking about mechanically reproduced images through mass produced magazines and what happens to them over a period of time. Being able to see the halftone process and the pulp of the magazine paper is a very important detail; it allows people to recognize these are reprocessed in a way—a new purpose, a new narrative.

I began noticing the tropes of surf and travel photography in magazines and became more interested in the things on the sidelines that were not the focal points. I found I was having this strange contradiction, being both attracted to the toxic masculine nostalgia but also finding it problematic. I started cutting/cropping out the bikini girl in the foreground of the wetsuit ads and focusing closer on missed connections coming from my own gay perspective. Instead of focusing on the hero surfer getting barreled on the perfect wave, I cut out the male comradery in the bottom left corner of the image and enlarged it. These images were no longer associated with the original image that was mass produced for print and it was not even close to the original color negative. 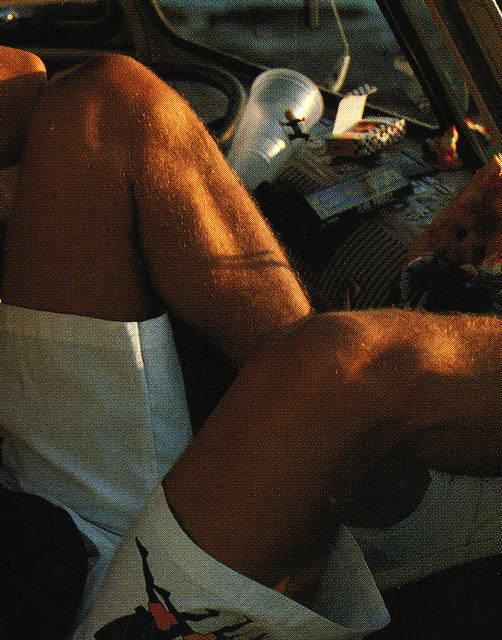 Outside of performance shots of the queer surfing community, what would you change about surf media and the way gay surfers are depicted?

I would like to see a new norm of an entire spectrum of non-binary, trans, femme, queer, BIPOC, same-sex couples, etc. being in surf media with normality and not just being used to share/expose their trauma. Yes, empathy is a great start but it comes off shallow if it’s not fully fledged out. I see a bright future.


The story in Surfer was such a great deep dive into your background, art and book project. Did you experience some solidarity from other surfers struggling with their sexual orientation in such a seemingly macho sport?

Absolutely, it was incredible to hear from so many people. I had many direct messages of encouragement and other people from all over the place so stoked to see Surfer Magazine represent queerness on such public platforms like Facebook and Instagram. It was refreshing and powerful to start conversations and build communities from the original post. I also truly enjoyed the many negative comments, as it only enhanced the momentum and importance of my project in the surfing community.


Are there any other sports you feel could use a change in gaze and have you considered a new body of work after this one?

Surfing and the “masculine gaze” has been a honey pot of material for me and I think new projects in sculpture, video and photography will continue. There is definitely room for identity politics and queerness in other sports but I think someone else’s voice and narrative should tackle that. 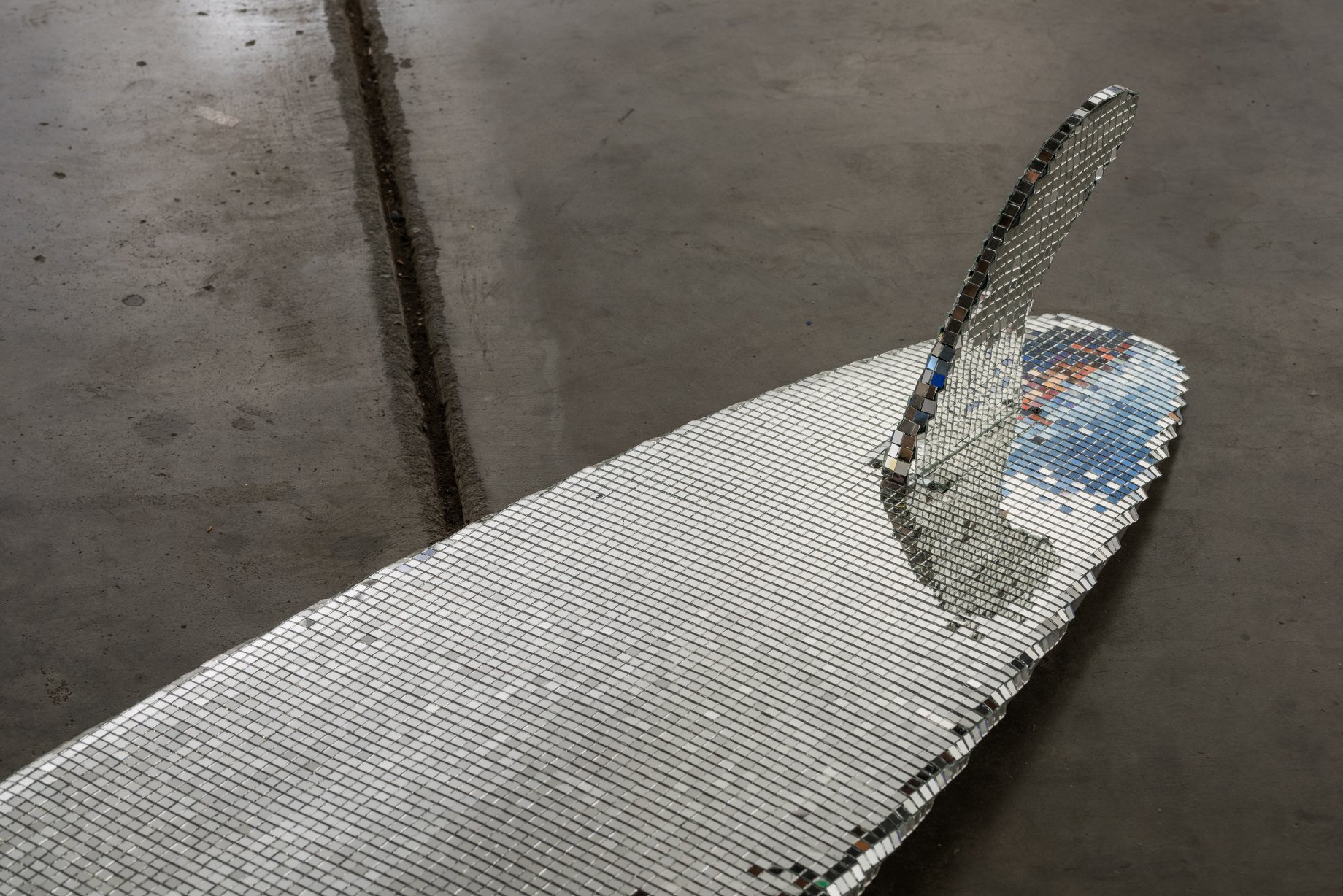 From ‘Excitations’ by Stephen Milner

It seems as though we also need a larger cultural shift to help each element of surfing become more accepting. How could music help with that?

Oh man, yes music is a great start. As an artist, one of my biggest inspirations is music. I also know that my music taste growing up came from skateboarding films, it helped shape my identity mostly because there wasn’t a typical stereotype with music in skateboarding, it was very diverse. There isn’t something called “skate rock” (that I’m aware of). Surfing is unique because it has an entire genre that influenced generations. This is a complex topic because of surfing’s history of appropriation of culture, it’s an interesting idea to unpack and or critique.

I think a good current example is Log Rap, they are creating surf films with the soundtracks of hip-hop and rap which is definitely reshaping surf tradition and inserting a different and more diverse culture through music. They would be problematic if they weren’t uplifting the BIPOC community but from what I can see they are trying and are public about it. It’s being aware of people and surf brand’s intentions that we should all be paying attention to.

Fluidity and poeticness of hip-hop and rap definitely relates to longboarding more than most genres. There is a powerful hypermasculine presence in hip-hop but its language can still be nuanced/camouflaged with vulnerability and grace much like the style in contemporary longboarding. But then again, is surf culture just easing into appropriation of outside culture like it has in the past? 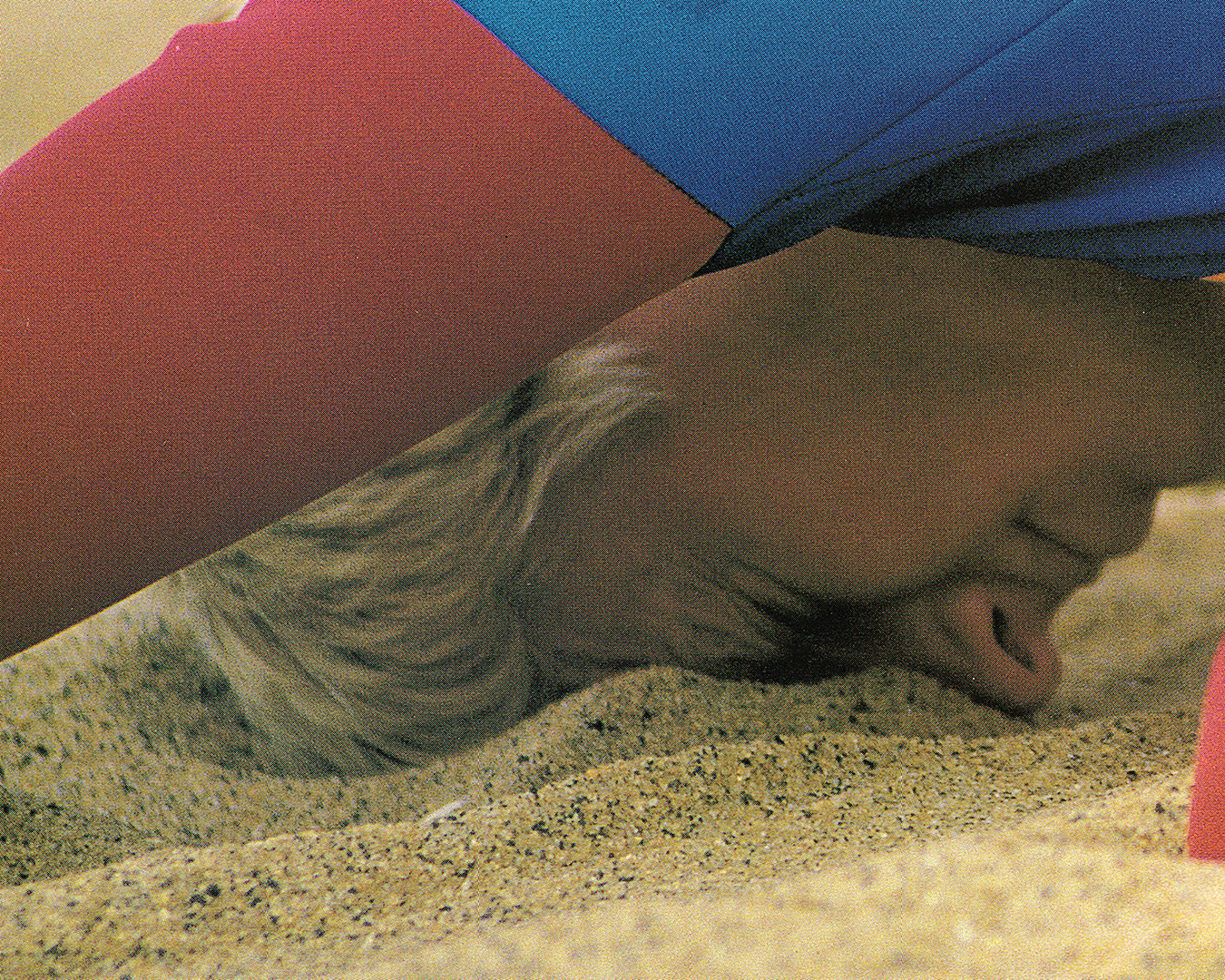 We get the sense that there is more inclusion with gay women in surfing than men. Does that seem true to you too?

I couldn’t say. I do know gay women have historically taken on a lot of trauma and roadblocks in the professional surf world. I don’t think we’d be moving forward with equality in surfing right now if it wasn’t for them. I think what they might be talking about is surfing’s insecurities of masculine vs. feminine and treating them strictly separate.


There is a lot of recent talk about allyship, especially with many people showing up for the first time in their lives to show overt support against racism. From your perspective, what does that look like for the queer community and someone who is just starting to show interest to embrace a more fair and equitable future for everyone?

It’s mind boggling that racism and homophobia is even a thing in surfing. Then again, surfing has a stereotype of either toxic board short overprotective bros or these spiritually open minded all welcoming dudes. The history of surfing is guarded heavily with intense protection of “tradition.” If we start opening up the conversation to tradition what does that unravel?

Yes, it’s real and important but only if people continue showing up and being vocal about racism and homophobia. It’s great that people are starting to critique the culture and history of surfing in order to move forward and truly make it more easily accessible. 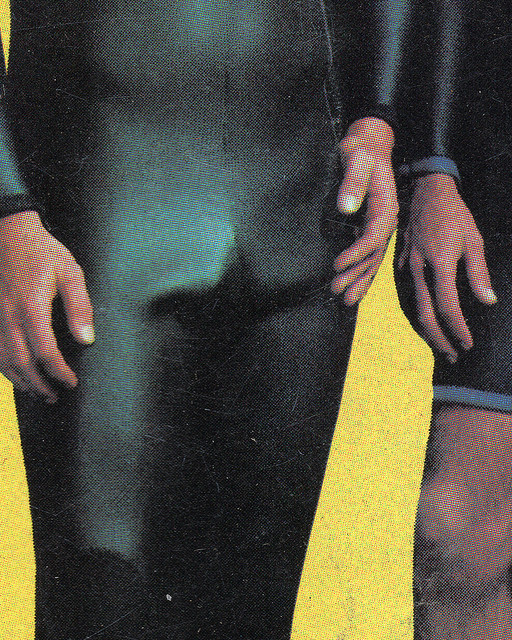 Your other series like ‘Goat Trails’ and ‘Excitations’ are also surf-related but explore a different relationship to the sport. Can you share more about those projects and the process behind them?

Those projects all started while I was working on my MFA thesis writing and exhibition. At the time, it was one big project but eventually I separated them. I was taking long road trips from Oregon to San Diego and visiting historic gay nude beaches and also surfing. Funny enough, there were plenty of iconic breaks that happened to be at those beaches.

Blacks Beach is one of the main nude beaches I photographed for Goat Trails. It also happens to be an iconic surf break. I’m a surfer, so I would visit the same beach to both surf and to also make pictures. I had to keep the activities separated because I knew that if I went to surf, I wouldn’t actually make pictures because I’d never want to leave the water. The treacherous trails down are called “goat trails” because of how difficult and dangerous they are. They are also shared by men cruising for sex and surfers hiking down to the break. I started to recognize the same psychological and emotional feelings I’d get when hiking down for either activity. They felt similar in that they are performed in the conditions of the pursuit of chance and vertigo with psychological undertones of fear, desire, and body thrills.

Growing up in a very small farmer town, I spent so much time trying to hide my identity as a gay male. While in grad school, I started to look back into my past and recognized that maybe I started surfing because I was attracted to the hyper-masculine surf culture. I was interested in investigating that space of confusion, hyper/toxic masculinity vs. homophobia in the sport. Sculpture, video, installation, and photography were the vehicles I used to merge my investigations into the history of gay identity, and to force a dialogue between surfing communities and gay culture.

– – – – –
Pre-order ‘A Spiritual Good Time’ and visit Stephen’s website for a look at more projects.

BY HANGING OUT WITH US, YOU ACKNOWLEDGE THAT YOU ARE OVER 21 YEARS OF AGE.

Roll With Us™, sign up for our email and get
20% off your first Old Pal Provisions order

BY HANGING OUT WITH US, YOU ACKNOWLEDGE THAT YOU ARE OVER 21 YEARS OF AGE.

Roll With Us™, sign up for our email and get 20% off your first Old Pal Provisions order

Please verify
you're over 21.