It's late morning and the streets are already alive up and down the six mile stretch of Avenida Cesar Chavez in the Boyle Heights neighborhood of east Los Angeles. Sun faded umbrellas pop with color above the fruit stands under the summer sky and bells ring signaling the arrival of cold ice cream carts. Masked up foot traffic means more eye contact as a sign of respect and the occasional tip of the hat takes the place of a handshake. Vibrant, hand-painted mariscos signs welcome the impending lunch rush about to grab their to-go orders and the neighboring Milpa Grille is brimming with patrons from all walks of life. The energetic and welcoming owner, Deysi Serrano offers up a coffee while simultaneously flitting about greeting her employees and customers who clutch the mouth-watering menu. 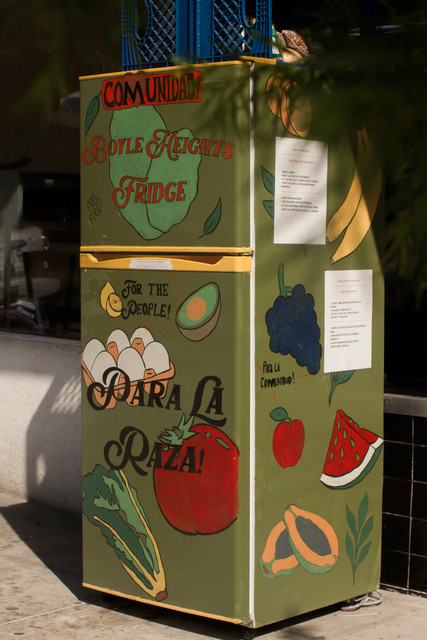 Day Hernandez pulls up to the already enthusiastic scene with a lot of the energy on the street seemingly surrounding the small restaurant. She's here to tell the story about the avocado-colored shared food refrigerator that sits just outside Milpa Grille and how it's helping those in need. The fridge is part of a broader effort by communities across the nation responding to the hunger crisis affecting the most vulnerable among us, especially during a pandemic when jobs are scarce for lower wage workers and the well of resources gets flooded for underserved areas in American cities.

The concept of the shared food fridge is relatively straightforward but novel enough to elicit curiosity from anyone passing by. Everyone in the community or adjacent neighborhoods is invited to drop off food which becomes communal in an anonymous exchange of goodwill and extends a hand in solidarity for someone who is at risk of going hungry. Freshness is also a factor, as veggies are often up for grabs providing nutrition to those in dire circumstances.

"It started with LA Community Fridges and my friend Ismael hit me up asking if I wanted to put some out in Lincoln Heights and Boyle Heights," adds Hernandez when asked what drove her to participate in something bigger than buying groceries for her neighbors falling on hard times. "That's when I hit up Deysi from Milpa Grille and she was quick about it; in fact, it went up faster than I expected it to." Almost overnight Hernandez found a fridge, hand-painted a small scale mural on the front to make it more welcoming and stocked it with items she felt people needed most.

The symbiotic relationship between Hernandez and Seranna is as much a part of the fridge's success as its location in front of Milpa Grille, especially since other locations around Los Angeles have come under pressure for diverting business from local bodegas or city officials enforcing antiquated health code policies. As much as the fridges are grassroots in nature, they're also planted the seeds for a more reciprocal connection between the residents in these communities.

Serrano, who identifies as Latinx and Hernandez, who identifies as Chicana both credit the youth for motivating other locals around the idea that taking care of each other leads to prosperity for everyone. A lot of that is evidenced in Milpa Grille's pre-existing pop-ups that cater to food partners who use the kitchen and storefront on the weekends as their own. Eateries like Macheen needed a place to go as social distancing regulations put large-scale food gatherings like Smorgasburg LA on hiatus. Rather than let that talent die on the vine, Milpa added chefs to the mix creating even more demand under the same roof. Even more impressive, "Desy is constantly posting about donating or connecting to other organizations to do something positive for the community. She was doing these things already," adds Hernandez when asked how the two originally connected. Richard, a senior citizen and Navy veteran joins the conversation. His roots run deep in the area and he reflects on the lessons he learned as a young gang member to how he evolved, crediting his time served in the military and now as a family man. He's not here to pick up or drop off food but acts as a steward to the fridge and the space it occupies. While Hernandez and Seranna humbly introduced the fridge to the neighborhood, Richard adopted the responsibility of regular maintenance and encourages others to follow the protocol explicitly outlined on the side. He found a purpose in these small actions that make a big impact to ensure things operate efficiently. His words ring true in a mantra he says with smiling eyes behind his mask: "We're all part of a family - the human family. I aspire to inspire before I expire."

Richard is only one voice influenced by the actions of Seranna and Hernandez and it's easy to imagine how their energy can be far reaching. In fact, they hope their personal mission will encourage others to buy back the block and assert the diversity that spans across East LA. "My goal is to have people of color running each business in Boyle Heights so we keep that culture and integrity. I don't want to see it get gentrified because it will dissolve and future generations won't know about it. Our job is to continue to keep that afloat," Seranna says in hopes that others will be inspired to donate to the fridge or play a larger part in getting to know the community and offer resources to help it flourish. Find Boyle Heights Community Fridge and Milpa Grille on IG to learn more about the community and how you can donate.