If you’ve been following Old Pal over the last few months, you’ve probably seen or heard about our radical friend, Ryan Lovelace. Along with being an epic pal, he’s one of the finest waterman, craftsman, and surfboard shapers around.

Ryan is the embodiment of all things Old Pal. Even though the story says Ryan found the Cosmic Collider on Craigslist, we like to think the Collider found him. After purchasing the rolling rust-bucket, he brought it back to Santa Barbara where it became an ongoing project for both him and his wife, eventually transforming into their dream home on wheels.

After three years in the Collider, they decided to upgrade and buy a boat. Sadly, this left the Collider high and dry, collecting dirt and dust (and a few other mechanical issues). Enter Old Pal.

One lucky day, we noticed he had posted the Collider on his Instagram. We immediately got on the phone with Ryan and roped him into letting us become the cosmic caretakers for his dream wagon. We promised to treat her well and, most importantly, get her back into the best shape possible. Thanks to the help of our creative and mechanical pals, the Cosmic Collider is alive and well acting as the pied piper for our community of rolling ramblers.

We recently sat down with Ryan to chat about his beloved bus and the storied history behind it. And if you see us out on the road, don’t hesitate to give us a wave, because we’ll give you a jolly honk right back. 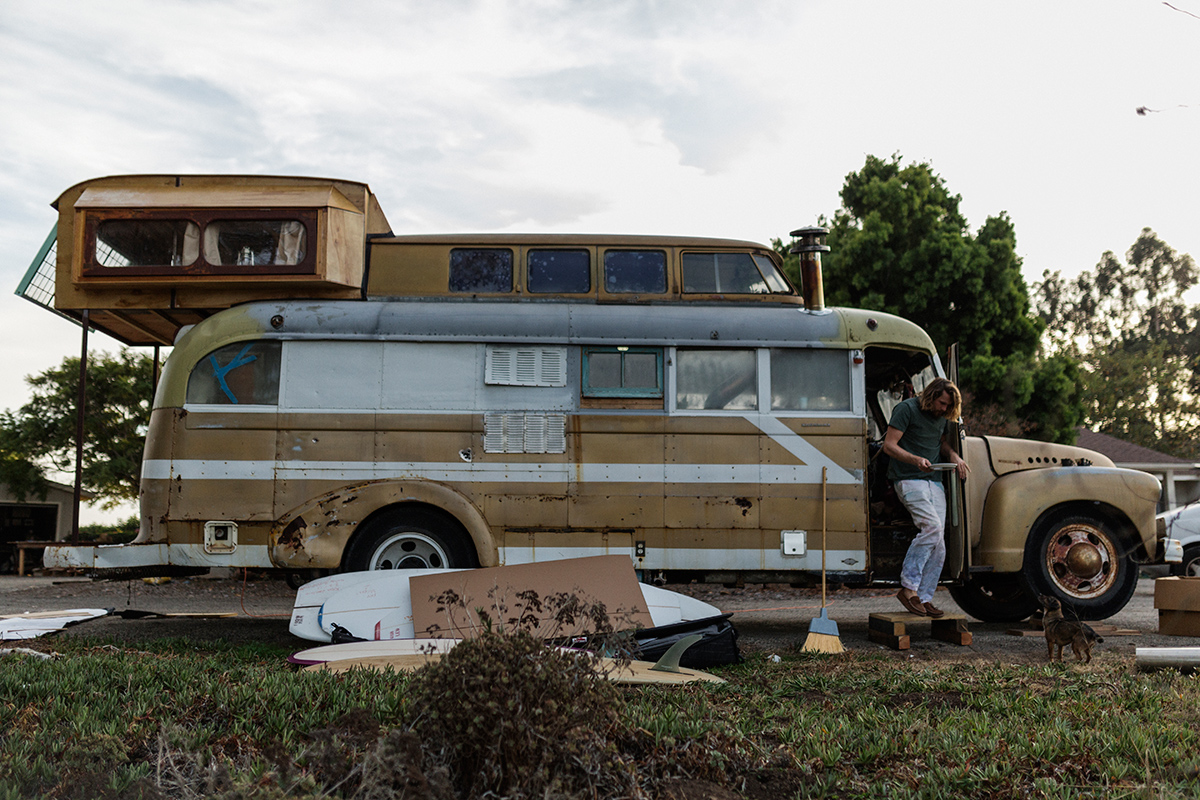 WHAT IS THE COSMIC COLLIDER AND WHERE DID YOU FIND IT?

She was for sale nearby, but I was in Australia when I first saw it posted on Craigslist. All the ad said was, "Runs, Drives, Stops, Registered." It had a small picture of what I thought was certainly the vehicle of my dreams. I crossed my fingers, and when I got home a few weeks later it was still for sale. Persistence pays off.


WHAT DID IT LOOK LIKE WHEN YOU FIRST SAW IT IN PERSON?

It was a metal shell inside. The VW was on it already, but it was rather barren. I saw it as a clean slate with an outrageous shell and more heart than I could even begin to understand. 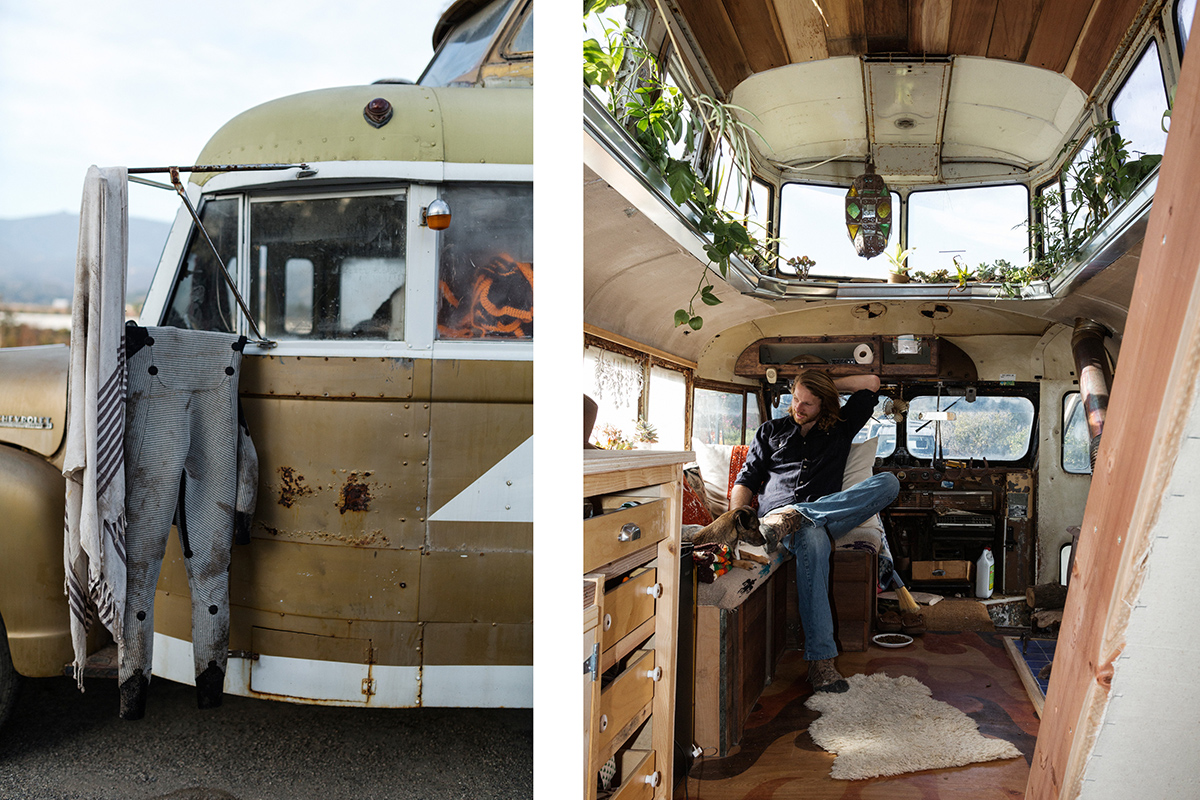 DO YOU KNOW ANYTHING ABOUT THE PREVIOUS OWNERS OR HISTORY?

I wish she came with a scrapbook of her history when I got her, but she indeed did not. The owner said that when he got it he felt that he was more of a conduit for it, like it was his job to find someone who could handle it.

I was told by a fella that he had seen it on the east coast at a Grateful Dead show in the '70s, though if you've been to a Dead show, you've likely seen something similar. I mean, I wouldn't be surprised if it was another bus he was remembering - though he assured me that he could never forget that thing. I have no doubt that it followed the Dead though, that’s kind of a gimme!


HOW LONG DID YOU GUYS LIVE IN IT?

My wife, Katie, and I got to plan out and build her together. We lived in it for about 3 years once we finished making it liveable.


WHERE DOES THE NAME "COSMIC COLLIDER" COME FROM?

Man, honestly I don't really remember. It was such a beast cruising down the freeway that the name just made sense when I was trying to decide what to refer to it as. Her maiden name is “The Second Coming Of Ophelia” (check “Ophelia” by The Band..you're welcome!). 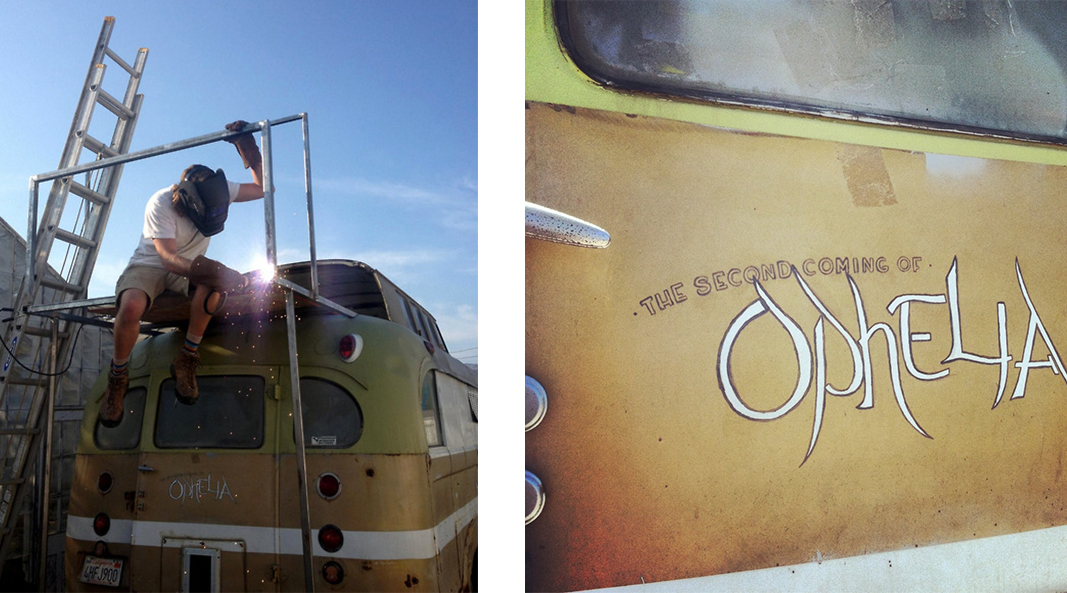 WHAT KIND OF WORK DID YOU PUT INTO IT?

Yeesh, over the years it’s hard to list it all out. Floors, walls, and the ceiling. I framed all that out and put in the redwood, then we built out a mini kitchen and closet/desk zone in the back. The roof was all rusted out and had about 20 coats of various paints on it. We spent a week with grinders and sanded it all back to metal and repainted it, then cut a huge hole in the back and went up!


WHEN DID YOU DECIDE TO PUT THE LITTLE CABIN ON THE BACK?

That was pretty immediate. We knew we wanted a nice little nook to sleep in and I wanted to maximize space. It obviously already broke a few rules, so I figured we'd just keep up on that and I cut that big hole in the roof back there. I learned to weld well enough to make the frame for the wood to be built on, then my friend Lando helped me frame and build out the box. It fits a queen sized mattress flawlessly and is about the most amazing little nook to spend a night in listening to waves and feeling a warm summer breeze roll through when the windows are all open. 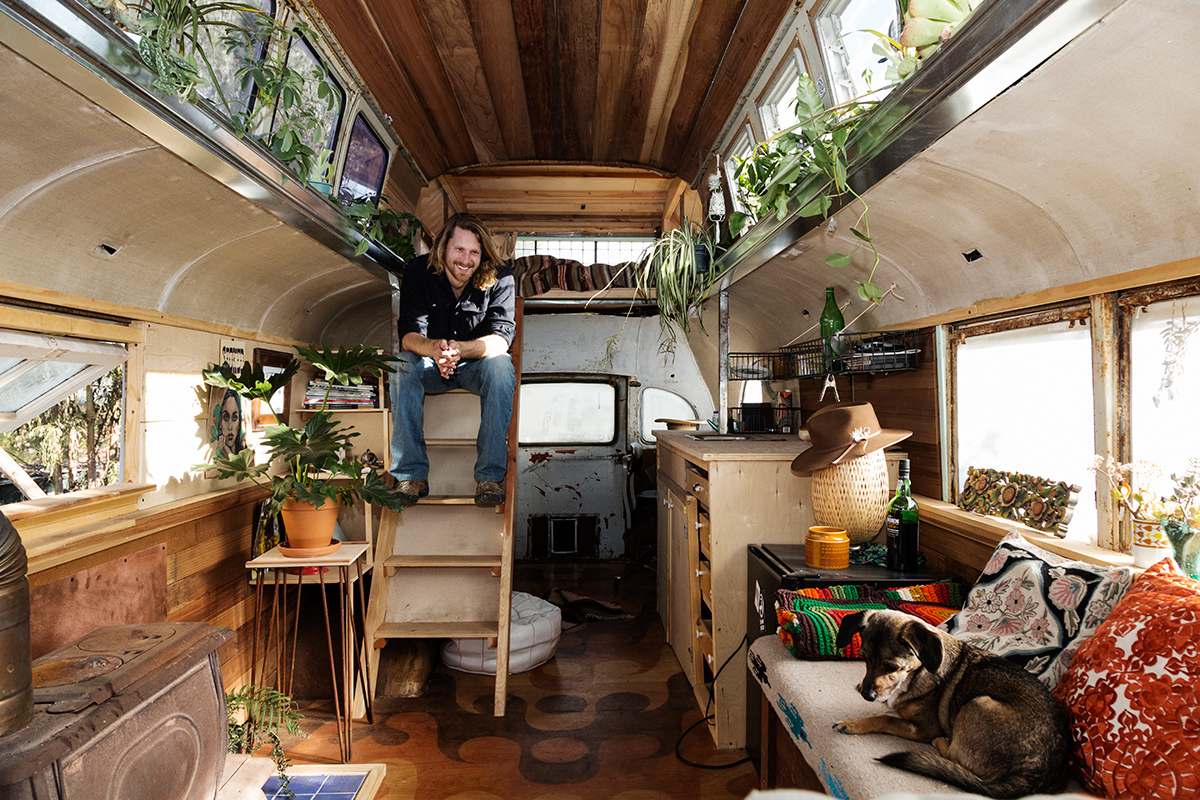 HOW WAS LIVING IN THE COLLIDER?

Beautiful. Cold. Romantic. Leaky. The number of times I woke up to a wet pillow or came home from a long day to find the mattress soaked with rain water was deflating. However cute the IG photos of van life are, if you've got a rig with personality then you know exactly what I'm talking about. It was a WONDERFUL adventure, and I wouldn't trade that time with Katie early in our relationship for anything. It was an amazing time and place to learn about our life and try to set the tone for where we were going together.


DO YOU KNOW THE HISTORY OF THESE KINDS OF VEHICLES? IN THE SURF WORLD, HOW ARE THESE RIGS A PART OF IT?

Surf history has a long line of “surf vehicles” — mostly because surfers tend to get to and stay at waves any way they can. This thing has a lot more connection to OG hippie culture and the country-wandering freedom seekers that needed it at that time and place. I always saw it as a time capsule of sorts. In general, very little is original anymore - and being truly original is nearly impossible these days, but we can take bits and pieces of what inspires us and insert them into our modern time. I like to see the Collider in that lens: it wasn't mine to build and I don't believe anyone can truly own it, but we put our own narrative into it and that’s joined us to its storied history and lineage.